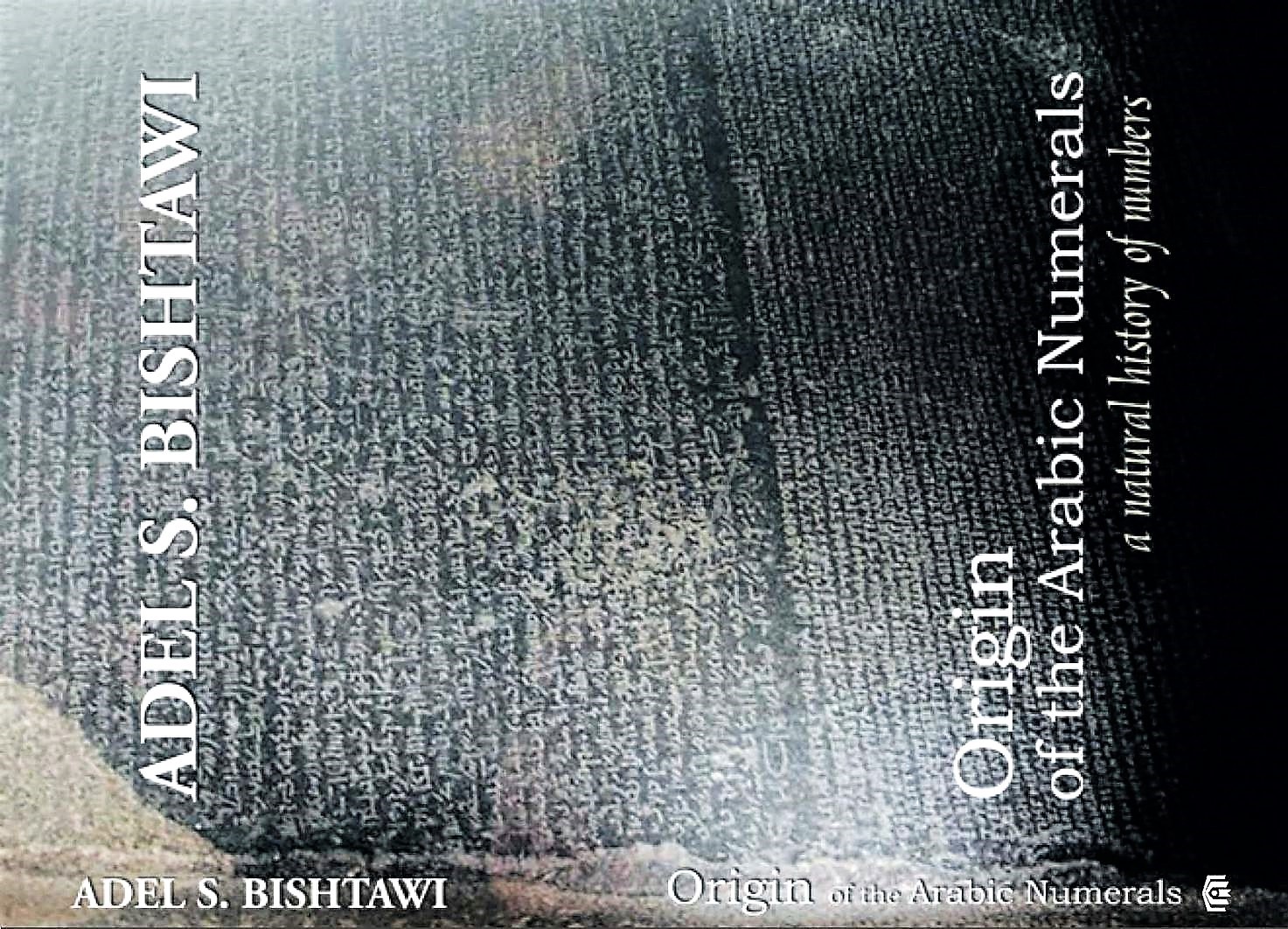 Origin of Arabic Numerals: a natural history of numbers. 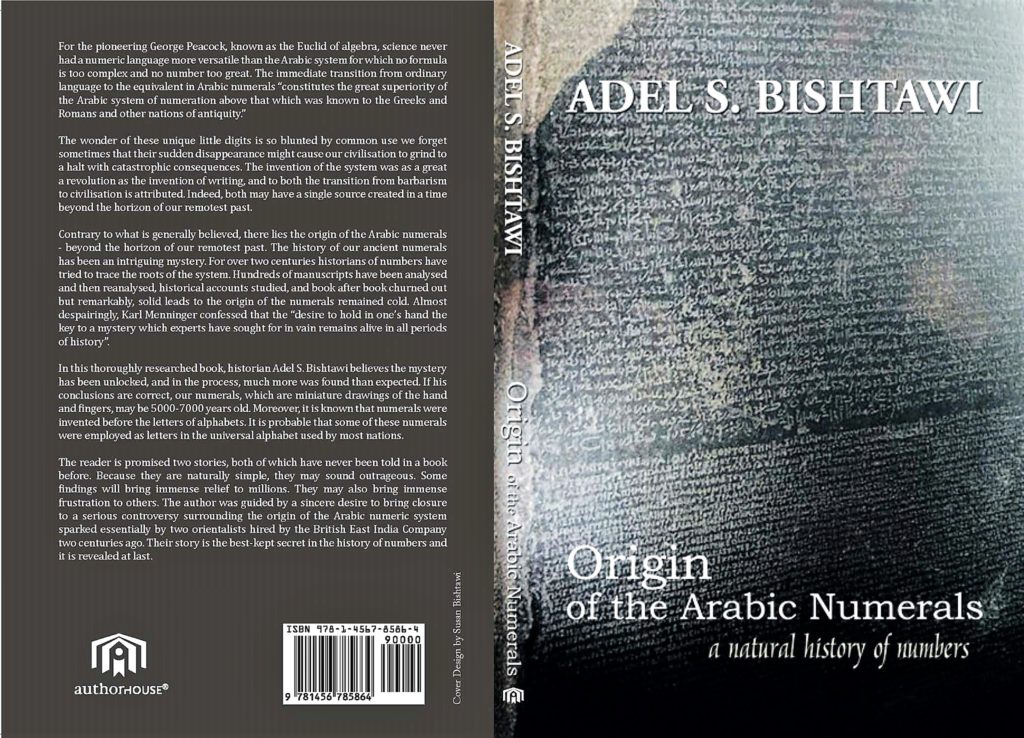 Origin of the Arabic Numerals offers the reader two stories the author believes they have never been told convincingly in a book before. If correct, the first story may be one of the oldest stories told in a book about those little “things” that are so essential to human civilisation, the sudden disappearance of which could cause it to grind to a halt. This is the story of the unique digits we use today. Symbols that can be recognised by a computer must be special. Symbols that can be recognised by monkeys must also be special, but symbols that can be recognised by machines, monkeys and humans must be the only universal script invented by human beings in a time beyond the horizon of our remotest past.
Also, it appears that human beings needed to identify and document ownership of property and other important assets by means of numeric symbols many centuries before they needed letters to preserve thought and ideas. How old the universal numeric system we use today is, nobody knows. What can be said is that most of our numerals have an ancient Arabian origin, and they even exhibit close connections with ancient Egyptian.

The Ciphering of Europe

The story of how Europe came to use the Arabic cipher system and its numerals is told in chapters 15 and 16 of the Origin of Arabic Numerals. Ignoring the narrative that the Arabic numeric system was brought from Andalusia in the 10th century by Gerbert d’Aurillac (946-1003) leaves history with a disappointing account of the wider spread diffusion of the Arabic system in Europe some 400 hundred years later than claimed and 650 years after the publication of al-Khwarizmi’s al-Jabr Wa Muqabalah. A realistic account of the European history of mathematics, therefore, would suggest that the Arabic numeral system was used in isolated cases but “outside Italy most merchants continued to keep their accounts in Roman numerals till about 1550, and monasteries and colleges till about 1650… Arabic numerals are used in the pagination of some books printed in Venice in 1471 and 1482. No instance of a date or number being written in Arabic numerals is known to occur in any English parish register or the court roll of any English manor before the sixteenth century; but in the rent-roll of the St Andrews Chapter, Scotland, the Arabic numerals were used in 1490.” *

Again, the student of history should be careful not to confuse the occurrence of a few exploratory Arabic numerals in a few records with the ‘diffusion’ of the Arabic numeral system. Some scholars described in some histories as among the first to work with the Arabic system do not appear to have succeeded in explaining how the system works. It was necessary, therefore, to prepare for the introduction of the system with explanatory notes of some of its most important functions.

This was done not by scholars, as often claimed, but by professional publishers of almanacs and calendars because they needed to sell their products. Almanacs and calendars enjoyed wide circulation in the 15th century. Some were composed with special reference to ecclesiastical events and contained dates for different festivals and fasts of the church for a period of some seven or eight years in advance, as well as notes on church rituals. The demand for such publications was significant, as “nearly every monastery and church of any pretensions possessed one of these. Others were written especially for the use of astrologers and physicians, and some of them contained notes on various scientific subjects, especially medicine and astronomy.”

Those almanacs and calendars needed to use Arabic numerals intensively. Their contribution to the diffusion of the Arabic system cannot be overestimated. Another important category of professionals who helped to diffuse the Arabic system were the makers of instruments and gadgets. The dramatic increase in the number of ships needed to serve the New World and the accelerated international trade created a huge demand for navigational instruments. Likewise, the prosperity brought by trade created a demand for clocks and elaborate novelties that required numbers. The choices faced by these artisans were limited due to the lack of a standardised European use of numeric systems and measurements, and many had to experiment with different systems until the marketplace forced the use of the Arabic numeric system. Whether in accounting, publishing, manufacturing and other crafts, the marketplace in the late 15th century spearheaded the diffusion of the Arabic numeric system among the rest of society rather than scholars and historians.

It may sound incredible but it does appear that it took most Europeans more than 150 years to accept the concept of the zero. The controversy surrounding the zero persisted for another three hundred years. “From the middle of the fourteenth century down to the fifteenth, when the Arabic system began to be generally adopted in calendars (long before its application to common accounts in bookkeeping), explanations clearly pointing out the power of place, which gives to the digit its decimal value, were frequently attached to Latin texts.”

To the rescue rushed the Flemish Simon Stevinus with a book written in his native tongue and translated into French by Simon of Bruges who adopted the word disme as the devise or representation of the new system of arithmetic. The English translation was done by Richard Norton (1606). It took another book, Clavis Mathematica, for the famous Dr. Peacock to declare that from this date (1631) onwards the Arabic numeral system became fully established in Europe.

The second story was thought by the author to be of significance but it may not be so anymore. The history of mathematics suffers from many shortcomings. Many of its “established facts” are neither established nor facts. Two centuries after its manufacture essentially by two orientalists hired by the East India Company two centuries ago, it is simply extraordinary that the story of the appropriation of the Arabic cipher system and its numerals remains untold. Not a hint about this exploit can be read in any of the hundreds of books published since the death in 1929 of G. R. Kaye, the last great independent-minded expert on the Arabic numeric system. The story of the appropriation is the best-kept secret in the history of mathematics but it may have been ignored because no credible evidence has ever been produced to support a non-Arabic authorship of the universal numeral system we use today.

*Please refer to the book for footnotes.